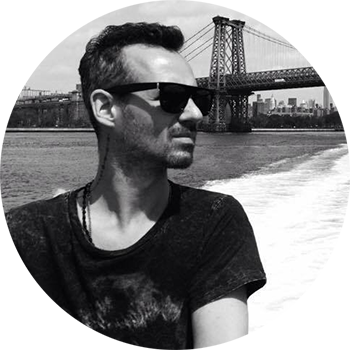 Armed with a degree in Multimedia Engineering, Alexis Callies joined REEF company in 2000, the first internet ware firm based in San Francisco and created by Philipp Brawerman (Sisco System Founder) as Associate Project Manager. Alexis was in charged with working on the first CMS platforms for FNAC.COM, LE MONDE, PHILIPS, VIVENDI.

Quickly snapped up by the “New Media” department at SONY MUSIC France in 2001, alongside Julie Demarigny, Alexis was made e-Marketing Manager & Digital Content Manager. In the digital department, Alexis oversaw the production of Sony Music artists websites as well as mastering Sony Music corporate website. He was also in charge of the digitization of all Sony Music creative content. He was in charge of nuturing the inhouses databases, managing and following the distribution to all digital agregators and retailers.

In 2007, a meeting with Marc Thonon, Producer and Director of the “Atmosphériques” label, led him to an opportunity to leave Sony Music to concentrate on the development of label artists. In the capacity of Multimedia Manager, he was directing digital strategy for artists such as; Joseph d’Anvers, Louis Chedid, Wax Tailor, Abd Al Malik, Axe Riverboy, Charlie Winston, etc… there, alexis began to develop the image and strategy of artists on digital medias.

With all this background, Alexis decided to work on his own, and in 2009,  he joined SONY MUSIC as independent creative director. Since then he has been responsible for art direction, event solutions, creative content, recordings and digital project management. Alexis directs and produces all creative work related to SONY Endorsement / Co-Branding / Sponsoring contracts with a multitude of brands, such as CACHAREL, DIOR, GIVENCHY, AUDI, FIAT, SONY, SAMSUNG, LOTUS, CREDIT. MUTUEL, MC DONALDS…

Simultaneously, Alexis cofounded SELEKTER.COM, (alongside Christophe Soulard and Olivier Cachin) the first human powered music recommendation WebApp.
At Selekter.com, alexis was in charge of managing music Database and technical webapp developpment. Leading the project as a CTO (Technical Direction) he was also highly involved with the business development of the company.

Alexis continues to grow and diversify. He now offers creative and innovative services, event production and music consulting for brands, labels and more.

He is also responsible for the Art Direction for Philippe Conticini and Jeffrey Cagnes famous french chefs.
These positions allow Alexis to grow his skills for packaging, Brand creative strategy and interior design.